("Magnification and details"), is considerably enriched and placed on two tabs:

By default, seven fonts are used here. Five of them are included in JiShop package (making its size twice larger). Use the commands from the menu on the icon

to specify your own configuration of fonts by changing them, deleting, or adding new ones.

contains key radicals of kanji in traditional dictionaries, codes in computer standards, and indices in various dictionaries and textbooks: 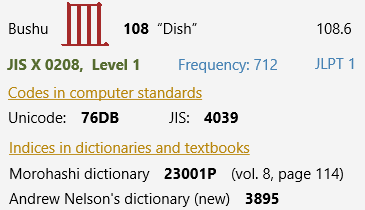 As compared to earlier versions, the number of these indices is several times larger. Now JiShop contains almost all indices listed in KANJIDIC2 dictionary file. Also, it shows the level of a kanji in JLPT (Japanese Language Profficiency Test) and the frequency of a kanji in Japanese texts measured by its appearance in "Mainichi Shinbun" newspaper.

3. The kanji entries have been provided with pinyin readings of characters in modern Mandarin Chinese:

Use the checkbox in "Options" => "Entry format" to supress the output of these readings. All of them were taken from KANJIDIC2 dictionary file "as is". It is unclear whether they have been properly edited by qualified linguists. Errors are not impossible.

4. The phonetic dictionary has new features for search history navigation. Click on the arrows

to pass from the last search results to earlier ones and back. Click on icon

to open the list of search queries and their results: 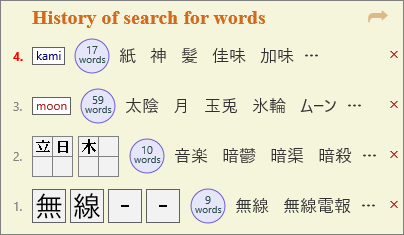 5. JiPad has a new setting, "Buttons above, canvas below". It can be helpful for those users who draw sweepingly, often accidentally going out of the canvas. In previous versions, when the cursor left the canvas, the stroke was considered finished. It's different now: you can move the cursor back into the canvas holding the left mouse button pressed and finish your stroke where you planned. However, leaving the application window (for example, moving the cursor to the window title bar) still results in having the stroke finished. But when, using the new setting, the canvas is placed lower, the probability of such a failure is smaller.

200 newly edited kanji entries and about 1000 compound words have been added to the phonetic dictionary.